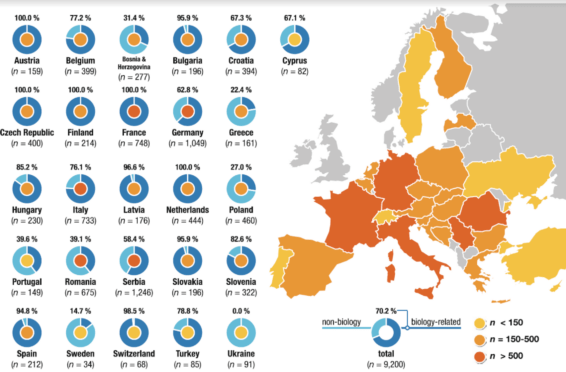 Investigations of evolution knowledge and acceptance and their relation are central to evolution education research. However, comprehensive and standardized comparisons across European countries, with their varying cultural backgrounds and education systems, were missing so far. Based on a standardized European survey with 9,200 first-year university students in 26 European countries, we demonstrate that European first-year university students generally accept evolution. However, they lack substantial knowledge about evolution, even those that are enrolled in a biology-related study program. Religious faith was the main influencing factor for acceptance of evolution. Additionally, knowledge about evolution and interest in biological topics increased acceptance of evolution, while among others the country’s affiliation was negligible. Our findings indicate that most of the European education systems for upper secondary education lead to acceptance of evolution. It appears that the differences in knowledge between countries do not reflect the extent to which school curricula cover evolutionary biology. Future studies should investigate the role of different European school curricula, identify particularly problematic or underrepresented evolutionary concepts in biology education, and analyze the role of religious faith when teaching evolution.

'ADN 8 - Learn how to Discover Nature' is the Portuguese textbook by Nuno Ribeiro, Bento Cavadas and Bruno Sousa awarded in the higher primary education & lower secondary education category of the #BELMA awards 🎉🎉🎉